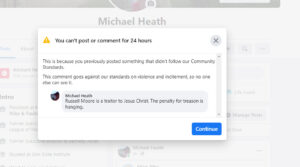 I’ve never been a power user of social media.  Not sure why.  Guess I’m just not social enough for social.  In recent months I’ve started posting more.  I woke up this morning to a twenty four hour ban on Fakebook.  I was disappointed.  Trump got banned for life this week.  Big Tech launched a coordinated digital decapitation of the leadership of the Trump movement.  All I can say is bring it on Zuckface.

So I’ve created an account on a gazillion alternative video and social platforms over the past month or so seeing this coming.  I don’t know exactly what will follow this purge by Big Tech.  One thing is certain, however.  They won’t succeed in gagging 80 million Americans.  We’re a noisy bunch of gun toting deplorables who haven’t even started fighting yet.

On Wednesday it got real in the Capitol.  But that’s nothing compared to what’s coming if the global communist cabal doesn’t slow down and recalibrate.  It appears they are all in this weekend for some reason.  I think they are afraid Donald Trump is going to go out with a bang before January 20th.  I’m just a regular guy.  I have no special inside information.  But like every loyal American I’m poking around online trying to do what I can to help.  I want my actions to be based on truth so they make things better.  There are reports Trump is going to declassify documents or invoke the insurrection act.  He knows he has to do something in the face of another impeachment, and potential political execution, by the Roman Catholic/Jewish triumvirate — Schumer, Pelosi and Biden.  This video lays out an interesting possibility.

Trump has eighty million allies.  And they are pissed.  Congress is toast.  The GOP is done.  FoxNews is history.  The demonrats won’t recover from this.  Giggle, Fakebook and Twatter are over.  Trump is going to remake America as a twenty first century constitutional republic.  And I’m going to do everything in my power to help him.  And we are going to kick China’s ass all the way back to their Asian socially scored communist prison camp.  America will not continue playing this political game.  We are done with it.

Years ago I was the most well known Christian political figure in Maine.  I kicked the sodomites around for a couple decades.  I forced them to call their buddy Soros and get him to invest millions to defeat me.  Since then God gave me a decade to grow, learn and wander in the wilderness.  Just like Moses he is calling me back to Egypt.  He’s wanting me to have some conversations with power, shall we say.  Cast in the role of Aaron is my best friend, Paul Madore.  We’re going to lead Maine people through this Red Sea of communism into Donald Trump’s new Christian constitutional republic.

The first order of business is casting the God-hating demon, Jezebel Janet Kills, out of Maine politics.  The head of the snake must be chopped off.  Kills is the head.  How are we going to do that?

I am announcing today that I’m officially a candidate for the Republican nomination for Governor of Maine in 2022.  Kills is going to be a one termer.

Look, I’m not kidding here.  I know many of you are going to think, “Who is this guy?  He thinks he can be Governor of Maine.  What has he ever done?!”  Quite a bit actually.  I suspect a quick Google of my name will get you started.  Or you can read the couple hundred or so COLUMNS on this website to get a feel for what I’ve done, and what I’m doing.  I’ve never hidden what I believe.  I’m an open book.

Unlike Carol Conley over at the Civic League I’m not ashamed of my Christian faith.  I know that Maine is Christian.  I’m just ashamed I haven’t made a better case for that fact before now.  This campaign is going to give me the chance to right that wrong.  While I’m a freshly minted Roman Catholic, I’m nothing like the Bishop in Portland.  I would NEVER close churches over a totally political and unscientific scamdemic.  And as Governor I will submit to the God of Christianity.  I respect free will, and the right of conscience.  He doesn’t understand his role in delivering the sacraments.  He refuses to practice his calling to speak truth to power.  Maine people are suffering as a result.  I’ll bring an end to all that.

Paul LePage bragged about opening Maine for business when he was Governor.  Now he dons the face diaper, brags about saving Maine from covid and tends bar.

I will open Maine for business.  What else is there?  We can’t maintain our families and churches if we don’t work.  You really think that doing everything through a computer screen from home with permission from Anthony Fauci and Klaus Schwab is going to help?  Of course you know better.  Maine people are hard working and smart.  They are waking up from this nightmare.  And when they are fully awake because they’ve finally learned the truth they are going to throw all the bums out and start over.

The Maine Legislature is a JOKE!  They are so scared they won’t use the house we built for them.  They are renting the Augusta Civic Center and hiding from their people.  They MUST stop this nonsensical distancing idiocy today and get back to work IN THE STATE HOUSE.  The Maine Legislature has been useless ever since I started working with them nearly four decades ago.  It is a thoroughly corrupt institution and must be changed from the bottom up.  If they want to prove they are serious about leading U.S. through this communist Red Sea then they can start by banning abortion and sodomy in Maine.  That’s simple.  The hard part is going to be repairing the economic and cultural devastation caused by nearly a century of religious laziness.  We’re all bored to tears with your gender/queer woke nonsense.  Give us our Liberty back so we can work for ourselves, love our neighbors and build strong families.

I have so much I need to say and write.  I’m going to stop here this morning.  I’ll be back with more … much more … in the days ahead.

It’s time to clean up this mess men.  Repent so we can get started.

I gave all I could for six months to justify in my own mind a campaign as a Republican.  I am continuing the campaign as an Independent candidate for Governor.  Learn more by clicking here.